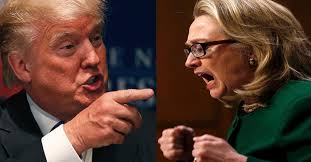 Is the new populist style of politics emerging on both sides of the Atlantic a cause or a symptom of the increasing sense of division in society?

Surveying the “Hillary for PA” Twitter feed last week as I have been known to do (well, on at least one previous occasion), I found an interesting exchange stimulated by a report of her eve-of-the-fateful election claim that the choice on offer was a clear one “between division and unity.” It was suggested by one respondent that based on the Merriam-Webster’s Learner’s Dictionary definition (being American, they are less familiar with the Concise Oxford version) of divisive, namely “causing a lot of disagreement between people and causing them to separate into different groups,” the choice was perhaps not as clear as the speaker imagined.

Setting aside the obvious fact that, between the pair of them the candidates succeeded very effectively in dividing the American electorate 50-50, one of the most salient differences between this US presidential election and the previous one (and indeed most recent ones) was the way in which the Democrat candidate seems to have managed to drive a large segment of her own party’s traditional voters into her opponent’s camp. Why, if Mr. Trump was as divisive as the media sought to suggest was he attracting both white-collar and blue-collar workers? And even garnering votes from the immigrant communities and racial groups he was alleged to have alienated? One cannot help help but compare this with the recent EU referendum in the UK where traditional labour and conservative supporters voted in comparable numbers for Brexit alongside a sizeable contingent of recent immigrants. For similar reasons the demographic of the recently expanded UKIP voter base conjoins ex-Labour voters in the North with ex-Tory supporters in the South.

It is of interest to ask what the dynamic is which is causing historical political differences to be set aside in this way, and whether it is similar between the UK and the US, as indeed many analysts are now starting to ask themselves. I would argue that there are distinct similarities. If one looks at what attracts non-Republicans to Trump, this has by all accounts much to do with a dislike of the manner in which politics is practised in Washington and how out of touch voters feel this is with their viewpoint and interests; and how at the same time all this is done in the name of building unity.

Take for example the issue of women’s rights. Janet Daley notes in a recent op-ed how Mrs Clinton in her concession speech expressed that her greatest regret was how “we”, as she put it, had failed to break the glass ceiling by electing a woman president. Was this the most important thing she wanted to do for the women of America? Seriously? As Daley goes on to ask rhetorically:

Note to female candidates on the Left: most women (and almost all the working-class ones) are not obsessing about glass ceilings. They are worried (especially the working-class ones) about paying the mortgage or the rent, about finding some kind of work that can fit around child-rearing, about whether their families can hope to thrive in the present circumstances.

In fact, most of them do not see their interests as being in direct conflict with those of men. Indeed, they have men in their lives of whom they are quite fond: husbands or partners, sons or sons-in-law, fathers or brothers, grandsons or nephews.

They are more likely to be angry if they feel that militant gender wars are taking precedence over the fate of those men, than they are about professional “glass ceilings” which are the concern of the very privileged. Women politicians of all parties should take this as a salutary lesson: sexual partisanship does not beat economics as an electoral issue.

But women are just one of the many groups which are singled out by the Liberal left as experiencing social injustice of one form or another which needs to be addressed in the name of building a more inclusive/united society. Groups are earmarked based on immigration status (recent only), race (non-white), religion (Christians need not apply), sexual orientation (other than heterosexual), adoptive gender and so on. How reasonable is it to claim that the politics of unity is a process to be pursued by dividing society into an ever-increasing number of groups whose purported rights, requirements and grievances we are all asked, obliged even, to demonstrate our respect for? And to demand that we further see the existence of the distinctions between the members and non-members and the increase in the number, size and separate identity of such groups as being beneficial for society, even something we should all “celebrate” (however one is supposed to do that)?

While it is convenient as an electoral strategy to try and blame the existence of these “divisions” on “demagogues” such as Donald Trump in the USA, Nigel Farage in the UK, and Marine le Pen in France, the success of these politicians has been in their ability not to manufacture the divisions which long preceded their rise to prominence, but rather to recognise how mainstream politicians, by pointing out the existence of difference and division in society, were using this as an excuse to marginalise and ignore the increasing sense of frustration of mainstream voters on the right and on the left so that not only was their voice not being heard but their opinions were morally questionable and somehow even a cause of dividedness in society. The new generation of populist political leaders in Western society are giving ordinary people a voice they feel they have lacked of late. Opinion remains divided on what the consequences of all this will be and will probably remain so until some of the fog starts to lift over the next few years and evidence starts to be collected about the ramifications of the new style of politics. But such division will pass and hopefully in the process some of the other divisions in society too, and there will be less likelihood for the politics of blame so to dominate the electoral process as it has recently.

Colin Turfus is a quantitative risk manager with 16 years experience in investment banking. He has a PhD in applied mathematics from Cambridge University and has published research in fluid dynamics, astronomy and quantitative finance.

Three Cheers for the EU ‘Single Market’ (but Not Four)

The Political Logic of the Excluded Middle

The Moral Basis of the European Project?

Be the first to comment on "The Politics of Division"

Get updates via email